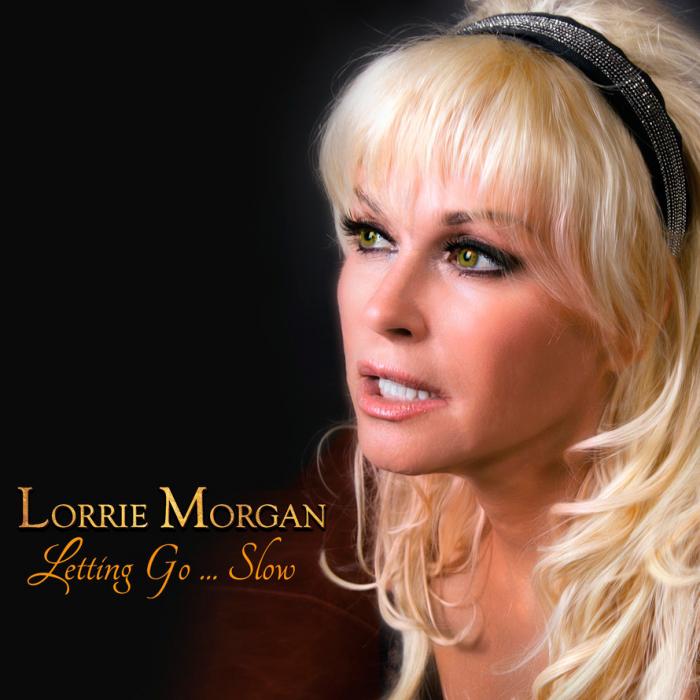 One of the most eloquently emotive country vocalists of modern times is launching her first new solo album in five years.

Lorrie Morgan, the first woman in her genre to begin her career with three consecutive Platinum albums, re-emerges on Shanachie Entertainment with Letting Go….Slow. It is a collection that showcases a rainbow of emotions, from darkest heartache to bright, shiny humor.    “Where I am in my life right now, I’m not afraid to express what I feel, or what I don’t feel,” she comments about the collection’s varied moods. “I’m not afraid to express my views on anything, especially on being a woman.

“I have been a daughter, a bride, a mother, a divorcee, a widow, a single mother, a breadwinner and, ultimately, a survivor. In many ways, I am a living, breathing country song, and I know what I sing.

Morgan has long been the envy of her peers for her lustrous vocal phrasing and the down-to-earth believability of her torchy performances. On records such as “A Picture of Me Without You” and “I Guess You Had to Be There,” she ached with pain. She was feisty and sassy in “Watch Me,” “What Part of No” “Five Minutes” and “I Didn’t Know My Own Strength.” She has kicked up her stiletto heels in fun on her hits “Except for Monday” and “Go Away.” On her epic “Something in Red” she was an anguished, struggling everywoman.

Her performances on Letting Go….Slow can match any of her earlier efforts, for they are among the most vibrant of her career. The collection is divided equally between new songs and her reinventions of country classics.

This peerless song interpreter brings a soprano lilt and a cha-cha retro tempo to the Patsy Cline favorite “Strange.” Bobbie Gentry’s Southern-gothic saga “Ode to Billie Jo” is taken at a slow, swampy pace with Morgan dipping into her deep alto register. She brings
enormous tenderness to Vern Gosdin’s “Is It Raining at Your House.”

On Bob Dylan’s “Lay, Lady Lay,” Morgan is pert and jaunty, riding a reggae groove. She resonates sadness in her version of Larry Gatlin’s “I’ve Done Enough Dying Today,” but rises resiliently in her reworking of Earl Thomas Conley’s “What I’d Say.”

Each of the new songs she has chosen for Letting Go…Slow is a small revelation. “Something About Trains” is a highly inventive arrangement and a contemplative lyric, both of which fit this singing stylist like fine couture. “Slow” is a power ballad that she gives a torrid, emotional undertow. “Jesus and Hairspray is “one for the girls,” a humorous, upbeat and highly entertaining ditty incorporating the old aphorism, “the higher the hair, the closer to heaven.”

Morgan co-wrote “How Does It Feel” in response to her divorce from singer Sammy Kershaw several years ago. The sublimely country “Lonely Whiskey” is the penultimate barroom weeper. The stunning “Spilt Milk,” on the other hand, finds the singer exploring a jazzier tone as she adopts an after-hours cabaret mood.

“Richard is so creative,” says Morgan. “It sounds like a cliche, but he really is a musical genius. And he believes in what he produces so passionately that it scares people. He’s very intense. We feed off of each other in the studio. We push each other to be better. He has a way of making me try harder.

“We recorded in a former church that has been turned into a recording studio on Music Row. It had a great vibe. We had all the musicians in there with me. I wanted it to sound like me and the guys just sitting and playing. It’s a very warm sounding record, with the steel, the harmonica and the dobro ‘answering’ my vocals. I like to sing ‘live’ with the musicians. A lot of the vocals on this album were done in one take, because I feed off the musicians. And Richard encourages that.

“I have been living with some of these songs for more than a year. ‘I’ve Done Enough Dyring Today’ and ‘Is It Raining at Your
House’ are songs I have wanted to record for 10 years. I sang ‘Ode to Billie Jo’ in my live shows for a long time.”

“Slow” is co-written by Ashlee Hewitt, who is Lorrie Morgan’s daughter-in-law and former backup singer. Hewitt now performs in the up-and-coming Nashville trio Post Monroe. “How Does It Feel” is even closer to home, since Morgan co-wrote it herself.

“I have always written songs, and I do love to write,” she comments. “But I don’t like to pair up with a lot of people. It’s more of a personal thing with me. It usually bothers me to co-write, and I don’t like appointment writing, at all. Plus, I’m not one of those people who says, ‘If I didn’t write it, I’m not going to record it.’ If somebody else’s song is better, I’m going to record it and not mine.”

Lorrie Morgan has been around great songs all her life. She is a Nashville native who is the daughter of Country Music Hall of Fame member George Morgan. She made her debut on the Grand Ole Opry stage at age 13, singing “Paper Roses.” Her father died suddenly of a heart attack at age 51. She was l6 at the time and just beginning her musical career. Lorrie Morgan began making records shortly thereafter. She was honored with induction into the Opry cast when she was just 24.

Morgan married fellow country singer Keith Whitley in 1986. She was signed to RCA Records in 1987, and her onslaught of hits began the following year. Whitley’s tragic death of an alcohol overdose in 1989 left her a widowed working mother. Their duet “Til a Tear Becomes a Rose” earned her a 1990 CMA award.

Lorrie Morgan maintained her recording pace in the new millennium, releasing collections in 2002, 2004, 2009 and 2010. In 2012 and 2013, Morgan starred and sparkled in the lavish Enchanted
Christmas productions at the opulent Opryland Resort in Nashville. She took that show on the road in 2014.

In 2013, she teamed with fellow Opry star Pam Tillis for the duet CD Dos Divas. The two hit makers then embarked on a two-year joint tour that sold out every appearance.

“We had a blast,” says Morgan with a chuckle. “It wasn’t until the Grits & Glamor tour that we really connected. We connected as working mothers, as businesswomen, as second-generation performers.” Pam is the daughter of Country Music Hall of Fame member Mel Tillis, who co-wrote “Strange” on Morgan’s new CD. Both women also share a finely honed sense of humor.

“I pride myself on my humor. My dad used to say, ‘You should never take yourself too seriously,’ and I got my sense of humor from my dad. I love to have fun. I’ve reached the age where I feel that I deserve good company around me, people who can make me laugh, who love music and who love to have a good time.

“On the outside, I’m very lighthearted. But on the inside, I have a lot of pain that I deal with. Singing is my therapy, and that is what this album is all about. ‘Lonely Whiskey’ says it all. Like I said, I’m at the point where I’m not afraid to sing about what I want to sing and to be creative. And this record gave me that chance.

“I didn’t want to record just another nice little album that gets put away on a shelf. I wanted to record a Grammy Award winning album. That was my goal.

“But no matter what happens, I think these recording sessions were just magical. It was the most fun I’ve ever had doing an album.”