DaBaby feat. Roddy Ricch have both secured a No. 1 on the Billboard Hot 100 with ''Rockstar'' 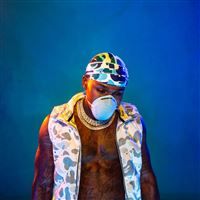 Baby’s first No. 1 hit! DaBaby and Roddy Ricch have both secured a No. 1 on the Billboard Hot 100 with “Rockstar.” The track is off of DaBaby’s album Blame It On Baby, which dropped April 17. This is Ricch’s second No. 1, after “The Box” claimed 11 weeks earlier this year, and DaBaby’s very first. Of course, “Rockstar” blew up on TikTok, where users danced to the chorus. After steadily rising for seven weeks, the song landed at No. 3 last week before jumping to No. 1. It currently has over 65 million views on YouTube and it doesn’t even have a music video. “Rockstar” is the sixth collaboration to hit No. 1 in a row, following “Rain On Me” by Lady Gaga and Ariana Grande, “Savage” by Megan Thee Stallion and Beyoncé, “Stuck With U” by Grande and Justin Bieber, “Say So” by Doja Cat and Nicki Minaj, and “The Scotts” by The Scotts — Travis Scott and Kid Cudi. That’s also a new No. 1 every week for the past six weeks. The charts have been going through it.

Over 363 MILLION streams to date!!

Over 19.2 MILLION streams in Canada alone!

"ROCKSTAR" from DaBaby’s sophomore album BLAME IT ON BABY available for immediate adds wherever hit music meets the mainstream.